In Czech Philharmonic
since January 2003 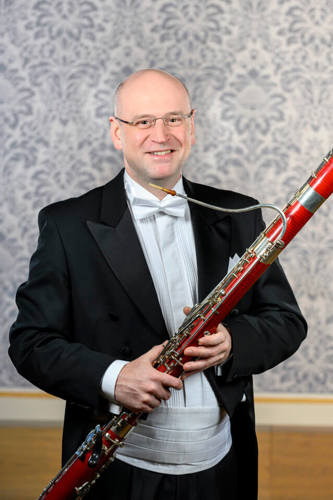 He studied at the Brno Conservatory with Professor Jiří Nykodým and the Academy of Performing Arts in Prague with professors Jiří Seidl and František Herman.

He won in a number of interpretation competitions (Kroměříž 1994, Chomutov 1995, Olomouc 2000) and received the laureate award at the Prague Spring International Competition 2002. With the bassoon quartet Fagotti Brunenses he took the 2nd prize at the International Bassoon Quartet Competition Potsdam (Germany) in 1995.

He taught at the Janáček Academy of Music and Performing Arts in Brno in 2003–2007, at the summer music academy Prag – Wien – Budapest in Semmering (Austria) in 2003–2013 and has been teaching at the Prague Conservatory since 2007.

He founded the International Music Festival Haná. He regularly takes part in recording projects with French bassoonist and conductor Pascal Gallois. As a performer, he focuses on 20th century and contemporary music.

In 2013, he co-founded the Czech Double Reed Society with his Czech Philharmonic colleagues and the Summer Bassoon Academy in Rataje nad Sázavou (Czech Republic). He takes part in the project of the Czech Double Reed Symposium and series of educational concerts for primary and music schools aimed at promoting the bassoon. He collaborates with the National Institute for Further Education and organises courses for music school teachers.

He arranges music for double reed ensemble (made of oboes and bassoons) and various chamber ensembles. He also composes educational pieces for bassoon and other instruments.

He likes all music genres, in accordance with the famous words that “When music is done with truth, passion and love, it is always good”. From among the many composers he likes, Czech authors Antonín Dvořák, Leoš Janáček and Bohuslav Martinů stand out.