In Czech Philharmonic
since March 1985 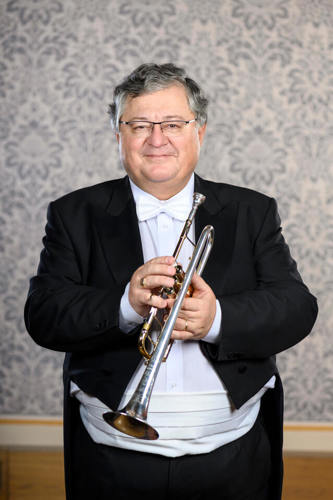 He was born to a family of musicians; both his father and brother also play the trumpet. He studied at the Prague Conservatory with Professor Josef Svejkovský and continued at the Academy of Performing Arts in Prague with professors Václav Junek and Miroslav Kejmar. As a student, he attended various competitions, taking the 2nd prize at the international competition Concertino Praga 1972 in the chamber music category and the 1st prize at the same contest in 1975 in the trumpet category. He won the 1st prize in the interpretation competition in Kraslice (Czech Republic) in 1978 and the 1st prize with the laureate award at the Prague Spring International Competition in the same year. In 1981, he was among the finalists of the music competition Tribune of Young Interprets in Bratislava (Slovakia).

He joined the Film Symphony Orchestra and the Radio Symphony Orchestra at the age of 18. As a soloist, he has performed in many European countries as well as beyond the old continent’s borders. He has recorded music for the Czech Radio, the Oslo Radio and has released four solo records, including the most recent one featuring baroque compositions for two trumpets recorded with his brother Jiří for the Rosa Classic recording company. He has also recorded many other pieces with various chamber ensembles and collaborates with brass bands and jazz orchestras (A. Votava, Veselka, E. Mosch, Ferdinand Havlík Orchestra, V. Hybš, Prague Big Band of Milan Svoboda, Rudolfinum Jazz Orchestra).

He has been giving private lessons since 1979, started teaching at the Prague Conservatory in 2000 and teaches at the Charlotte Masaryková Music School in Prague. Since 2004, he has regularly taught at the brass courses in Vimperk (Czech Republic) and worked as an assistant professor at the Academy of Performing Arts in Prague in 2008–2011. He has been teaching at the Jaroslav Ježek Conservatory since 2010.