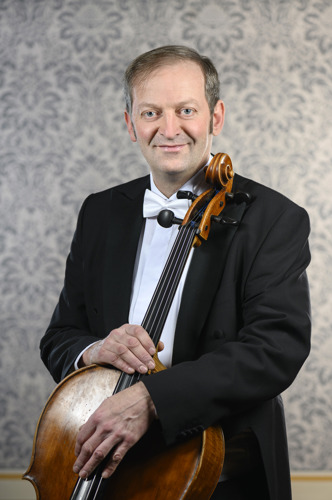 He started playing the cello aged seven. While attending the Music School in Czech town of Chtěboř, he won the attention of cellist Václav Jírovec and famous professor Mirko Škampa. This encounter played an important role in his later professional development as he became Škampa’s private student soon after. He then also gained his first chamber and orchestral experience. He joined a student piano trio and the Prague Student Orchestra, famous talent seedbed, with which he went on numerous tours abroad. After graduating from a grammar school, he was enrolled at the Academy of Performing Arts in Prague in 1986, it is very rare to see a student without conservatory education accepted to the Faculty of Music there. He studied the cello with Professor Rudolf Lojda and graduated in 1990.

Already during his studies, he became a member of various ensembles and orchestras (Prague Chamber Orchestra, Virtuosi di Praga, Czech Chamber Orchestra, Prague Radio Symphony Orchestra). He later co-founded chamber ensembles Joseph Trio, Musica Gaudeans, Concertino Notturno Praha, Virtuosi di basso and Capella Regia Praha (focusing on historically informed performance). With the Musica Gaudeans quartet, he took part in the finale of an international competition in Osaka (Japan) twice in a row and played in dozens of concerts in the Czech Republic as well as Germany, Switzerland, Saudi Arabia, Greece and Slovakia. He is a sought-after chamber musician for his interpretation qualities and rich artistic experience.

Since 2000, he has been an active member of the Czech Philharmonic Quartet, which he also co-founded. The ensemble performs in the Czech Republic and has been to successful tours to Japan, Israel, Luxembourg, Great Britain, Scotland, Germany and Slovakia. They have also recorded numerous CDs. In 2016, he founded the Czech Philharmonic Piano Trio AMALIA with flutist Lucie Brotbek Prochásková and pianist Václav Mácha. They focus on popularising great compositions written for this rather unusual instrumental group.