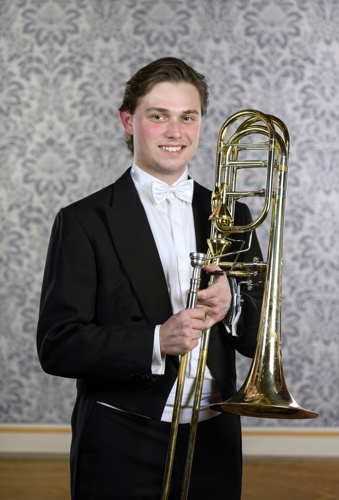 In Czech Philharmonic
since August 2019

He studied the trombone at the Prague Conservatory with Professor Josef Šimek in 2015–2019. He started playing the bass trombone in Year 4 and was accepted to the Academy of Performing Arts in Prague, where he now studies with his Czech Philharmonic colleague, Professor Lukáš Moťka. He has entered various competitions, including the International Interpretative Competition Brno 2017 (3rd place) and the Czech Conservatories Competition 2018 in Teplice (2nd place). As a member of their Orchestral Academy, he played with PKF – Prague Philharmonia in 2017–2019. Besides classical music, he enjoys brass music, from the Balkans in particular, which he discovered thanks to his music school teacher Jakub Mašek. He also arranges and composes music, mainly for small brass ensembles.