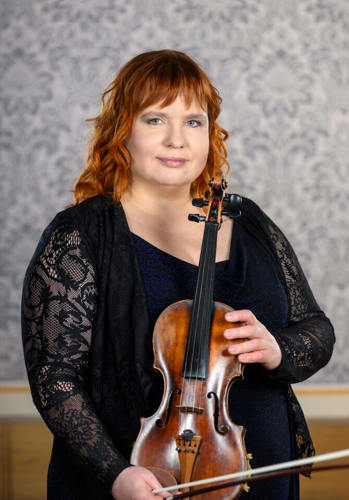 She started playing the violin aged four with her father PhDr. Ladislav Dvorský and a year later, she started attending classes of Professor Zdeněk Vyoral at the Voršilská Music School in Prague. She continued at the Prague Conservatory with Professor Václav Snítil and then graduated from his class at the Academy of Performing Arts in Prague. She completed a two-year postgraduate course at Musikhochschule Winterthur Zürich in Professor György Pauk’s class and later attended private lessons with him at the Royal Academy of Music in London.

She won the 1st prize at the Jaroslav Kocian International Violin Competition (Czech Republic) in 1991 and previously received a special award at this competition for the interpretation of Henryk Wieniawski’s music. Between 1994 and 1999, she regularly participated at the International Summer Academy “Prague - Vienna – Budapest” in Semmering (Austria), where she collaborated with famous violinists (Igor Ozim, Eszter Perenyi, György Pauk). Two years later, she won the 3rd prize at the Bohuslav Martinů International Competition. In 1997 and 1998, she received a scholarship at the Meadowmount School of Music in New York, where she studied with Professor Stephen Shipps and later became his assistant.

In 2003, she was selected as the only Czech applicant to attend seven-week international violin masterclass Keshet Eilon in Israel, held under the auspices of Maestro Shlomo Mintz. She also studied with Eduard Grach in Israel. In 2003 and 2004, she attended a masterclass of Professor György Pauk in London. In 2013, she led a masterclass at the British School Al Khubairat in Abu Dhabi held during the Czech Philharmonic’s concert tour in the United Arab Emirates.