In Czech Philharmonic
since January 2005 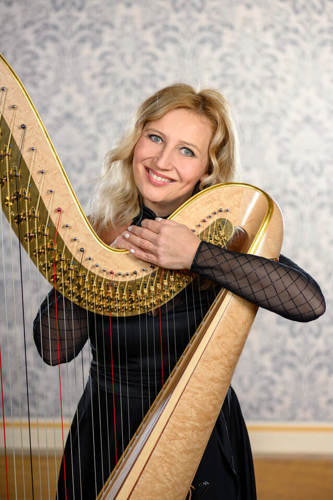 She studied at the Prague Conservatory and graduated from the Ostrava University in Professor Libuše Váchová’s class. She was then accepted to the prestigious Indiana University and studied with Professor Susann McDonald. She is the only Czech harpist to win the world’s top International Harp Competition which takes place in the USA (1992). In the same year, she won the 2nd prize at the International Harp Contest in Israel, which has the longest tradition among harp competitions, being also the only Czech harpist to be invited to this competition. She also won Concours International de Musique de Chambre (France) and Torneo Internazionale di Musica (Italy). She received the “Lady Pro” award for the top ten most significant Czech female personalities as the first ever classical musician.

She performs as a soloist and with chamber ensembles in the Czech Republic and abroad, such as at the Alice Tully Hall – Lincoln Center (New York), Theatre Châtelet in Paris, Musikverein in Vienna, the Prague Spring Festival and Berliner Festtage. She joined violinist Maxim Vengerov for a tour around Europe and Israel and cooperates with many excellent musicians within the Spannungen Chamber Music Festival (Germany), Parry Sound Festival of Authors (Canada), Festival Juventus de Cambrai or Elba Isola Musicale d´Europa (Italy). She has also played with many Czech and foreign orchestras as a soloist at the Carnegie Hall in New York, Berliner and Kölner philharmonie, Suntory Hall in Tokio, Gewandhaus in Leipzig (Germany), Symphony Center in Chicago, Concertgebouw in Amsterdam, Rudolfinum in Prague and many others.

She teaches at the Royal Academy of Fine Arts in Brussels and was appointed Associate Professor at the Academy of Performing Arts in Prague. She is the Czech Philharmonic principal harp player and is regularly invited to world harp congresses and symposiums, including international harp competitions in the USA, France and Israel, as well as to many masterclass courses all around the globe. She has been a guest professor at prestigious institutions, including the Indiana University (USA) and Haute Ecole de Musique (Switzerland). She was the director of the 7th World Harp Congress in Prague in 1999 and has been a member of the artistic board of the Academy of Performing Arts in Prague and the Czech Philharmonic.

She plays a Lyon & Healy harp which she won in the International Harp Competition 1992. She is also the official player of this prestigious company.