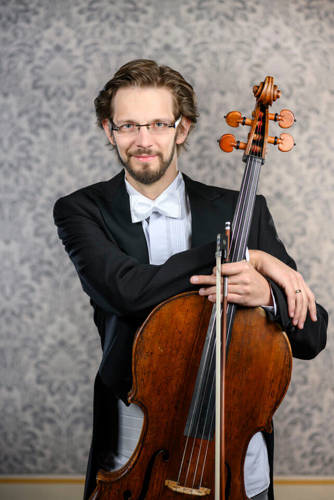 He started playing the cello as a child, first attended private lessons with Professor Oldřich Kavale, then studied at the Prague Conservatory and the Academy of Performing Arts in Prague with Professor Miroslav Petráš. He attended masterclass courses in Kronberg (Germany) with S. Isserlis and B. Pergamenschikow and in Pilsen (Czech Republic) with R. Wallfisch. As a soloist, he has appeared at many festivals in the Czech Republic (Talich’s Beroun, Young Prague, Young Stage) as well as abroad (Festival l'Eté Musical en Bergerac in France, Music Home Alive Festival in the Netherlands). He regularly collaborates with the Czech Radio and the Czech TV.

With the Taras Piano Trio, he won the Internationaler Johannes Brahms Wettbewerb competition (Pörtschach, Austria) in 2007 and Rovere d'Oro (San Bartolomeo, Italy) in 2008. With the Lobkowicz Trio, he won the 3rd prize and the award for the best performance of composition by Antonín Dvořák at the Antonín Dvořák International Chamber Music Competition and the 1st prize at the Johannes Brahms International Competition (Pörtschachu, Austria). The ensemble also won the Czech Chamber Music Society Award 2017. Besides playing the cello, he is the pianist of the Escualo Quintet.

Bohuslav Martinů’s music has always been very close to his heart but he has recently also fallen for Gustav Mahler’s Symphony No. 2 “Resurrection”. His secret passion is jazz.