In Czech Philharmonic
since November 1989 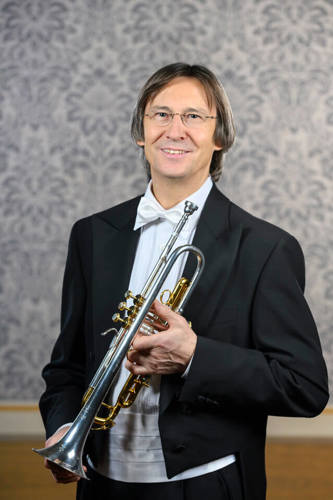 As a child, he was attending trumpet lessons in the local music school in Ledeč nad Sázavou with Karel Růžička. He won two silver medals in national competitions (in the trumpet category in 1973 and the chamber category in 1974). He successfully got through the talent and theoretical exams and was enrolled at the State Conservatory in Prague after which he studied at the Academy of Performing Arts in Prague, continuing with Professor Václav Junek. In the sixth and seventh year, he played in the Karlín Musical Theatre. He has also performed with the Film Symphony Orchestra, the National Theatre Orchestra and the Prague Symphony Orchestra.

For many years, he has played with the Chamber Brass Ensemble of Josef Zámečník, later also with the popular Prague Brass Soloists. He made successful arrangements of baroque compositions for these ensembles (such as Music for the Royal Fireworks, Jeremiah Clarke’s Suite, selected Czech and world carols or Japanese Song of the Coast). He sees the arrangements and his own compositions as the link between creating something useful and having fun while tackling an uneasy job – taking the black dots on the paper and making music, beautiful but ephemeral like the flowers of the Japanese cherry in the spring sun. He teaches at the Plzeň Conservatory.