"The real test came the evening before the Resurrection when the Philharmonic presented the Cello Concerto and Seventh Symphony of Dvořák...  Rest assured, this is still the Czech Philharmonic of warm strings, penetrating brasses and fleet-footed danciness. But it does have a slight Russian accent under Mr. Bychkov’s direction. The orchestra’s sound may be a bit more international these days, but its players are still the masters of their own country... Let’s hope that, under Mr. Bychkov, we don’t have to wait another four years to here them hear again." Marking 100 years of Czechoslovak Independence, Semyon Bychkov's tenure as Chief Conductor and Music Director of the Czech Philharmonic began with celebratory concerts in Prague, London, New York, Washington – as part of an extensive US tour - and Vienna. Later in the season, in addition to concerts in Prague which heralded the completion of The Tchaikovsky Project for Decca Classics, and the start of a new Mahler recording cycle, Bychkov led the Orchestra on tour to Germany and Belgium.

In common with the Czech Philharmonic, Bychkov has one foot firmly in the cultures of both the East and the West. Born in St Petersburg in 1952, Bychkov emigrated to the United States in 1975 and has lived in Europe since the mid-1980's. Singled out for an extraordinarily privileged musical education from the age of 5, Bychkov studied piano before winning his place at the Glinka Choir School where, aged 13, he received his first lesson in conducting. He was 17 when he was accepted at the Leningrad Conservatory to study with the legendary Ilya Musin and, within three years had won the influential Rachmaninov Conducting Competition. Denied the prize of conducting the Leningrad Philharmonic, Bychkov left the former Soviet Union.

By the time Bychkov returned to St Petersburg in 1989 as the Philharmonic’s Principal Guest Conductor, he had enjoyed success in the US as Music Director of the Grand Rapids Symphony Orchestra and the Buffalo Philharmonic. His international career, which began in France with Opéra de Lyon and at the Aix-en-Provence Festival, took off with a series of high-profile cancellations which resulted in invitations to conduct the New York Philharmonic, Berlin Philharmonic and Royal Concertgebouw Orchestras. In 1989, he was named Music Director of the Orchestre de Paris; in 1997, Chief Conductor of the WDR Symphony Orchestra Cologne; and the following year, Chief Conductor of the Dresden Semperoper.

Bychkov’s symphonic and operatic repertoire is wide-ranging. He conducts in all the major houses including La Scala, Opéra national de Paris, Dresden Semperoper, Wiener Staatsoper, New York’s Metropolitan Opera, the Royal Opera House, Covent Garden and Teatro Real. Madrid. While Principal Guest Conductor of Maggio Musicale Fiorentino, his productions of Janáček’s Jenůfa, Schubert’s Fierrabras, Puccini’s La bohème, Shostakovich’s Lady Macbeth of Mtsensk and Mussorgsky’s Boris Godunov each won the prestigious Premio Abbiati. New productions in Vienna include Strauss’ Der Rosenkavalier and Daphne, Wagner’s Lohengrin and Mussorgsky’s Khovanshchina; while in London, he made his debut with a new production of Strauss’ Elektra, and subsequently conducted new productions of Mozart’s Così fan tutte, Strauss’ Die Frau ohne Schatten and Wagner’s Tannhäuser. In 2018, he conducted Wagner’s Parsifal at the Wiener Staatsoper and at Bayreuth, returning to Bayreuth to conduct it again in 2019.

On the concert platform, the combination of innate musicality and rigorous Russian pedagogy has ensured that Bychkov’s performances are highly anticipated. In the UK, in addition to regular performances with the London Symphony Orchestra, his honorary titles at the Royal Academy of Music and the BBC Symphony Orchestra - with whom he appears annually at the BBC Proms – reflect the warmth of the relationships. In Europe, he tours frequently with the Royal Concertgebouw Orchestra, the Vienna Philharmonic and Munich Philharmonic, as well as being a frequent guest of the Berlin Philharmonic, the Leipzig Gewandhaus, the Orchestre National de France and the Accademia Nazionale di Santa Cecilia; in the US, he can be heard with the New York Philharmonic, Chicago Symphony, Los Angeles Symphony, Philadelphia and Cleveland Orchestras. In 2019/20, in addition to his commitments to the Czech Philharmonic which include an extensive tour across Japan, concerts in Russia, at the Prague Spring International Music Festival and Smetana’s Litomyšl Festival, Bychkov will conduct the Munich Philharmonic and the Royal Concertgebouw at home and in Germany, as well as performances of Strauss's Elektra in Vienna and Wagner's Tristan und Isolde in London.

Recognised for his interpretations of the core repertoire, Bychkov has worked closely with many extraordinary contemporary composers including Luciano Berio, Henri Dutilleux and Maurizio Kagel. In recent seasons he has collaborated with René Staar, Thomas Larcher, Richard Dubignon, Detlev Glanert and Julian Anderson, conducting premières of their works with the Vienna Philharmonic, New York Philharmonic, Royal Concertgebouw and the BBC Symphony Orchestra at the BBC Proms. In collaboration with the Czech Philharmonic, Bychkov initiated the commissioning of fourteen new works: nine from Czech composers as well as works from Glanert, Anderson, Larcher, Bryce Dessner and Thierry Escaich. In March 2020, Bychkov and the Czech Philharmonic give the Czech première of Glanert’s Requiem für Hieronymus Bosch hot on the heels of its UK première, also conducted by Bychkov, with the BBC Symphony Orchestra in December 2019.

Bychkov made extensive recordings for Philips with the Berlin Philharmonic, Bavarian Radio, Royal Concertgebouw, Philharmonia, London Philharmonic and Orchestre de Paris. Later, his 13-year collaboration (1997-2010) with WDR Symphony Orchestra Cologne produced a series of benchmark recordings that included works by Strauss (Elektra, Daphne, Ein Heldenleben, Metamorphosen, Alpensinfonie, Till Eulenspiegel), Mahler (Symphony No. 3, Das Lied von der Erde), Shostakovich (Symphony Nos. 4, 7, 8, 10, 11), Rachmaninov (The Bells, Symphonic Dances, Symphony No. 2), Verdi (Requiem), a complete cycle of Brahms Symphonies, and works by Detlev Glanert and York Höller. BBC Music Magazine voted Bychov's recording of Wagner’s Lohengrin Disc of the Year in 2010; and his recording of Schmidt’s Symphony No. 2 with the Vienna Philharmonic Record of the Month, while Record Review’s Building a Library on BBC Radio 3 chose his recording of César Franck’s Symphony in D minor as their Recommended Recording. In 2015, Semyon Bychkov was named Conductor of the Year by the International Opera Awards. 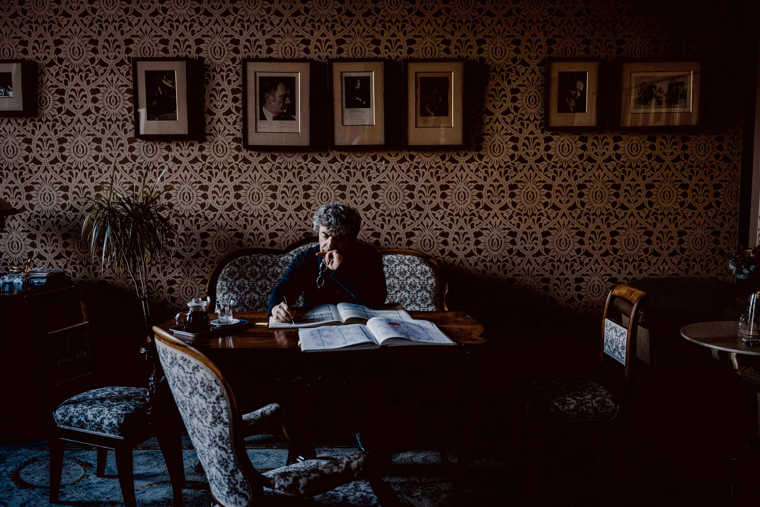 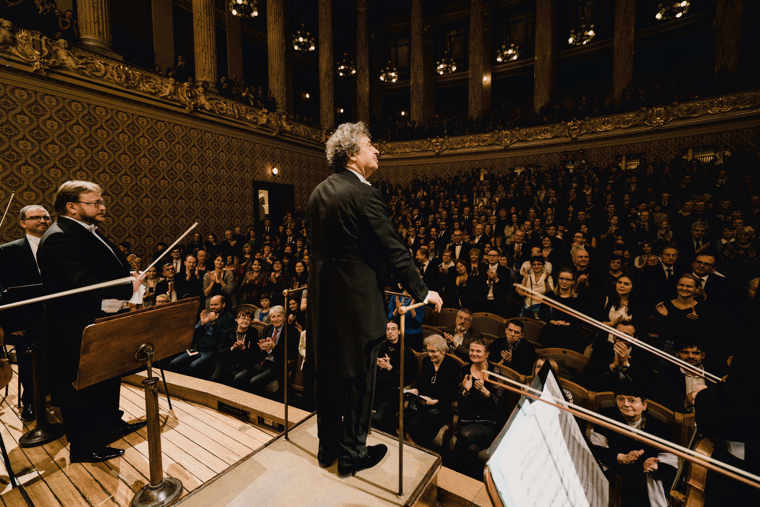 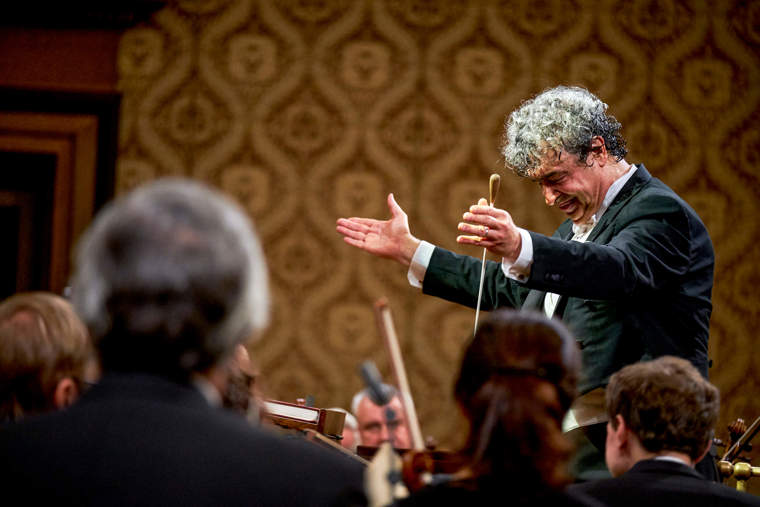 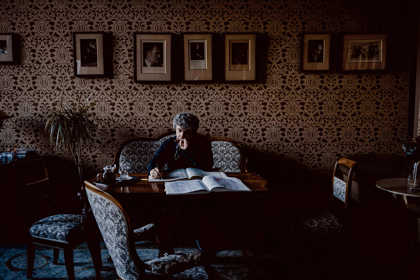 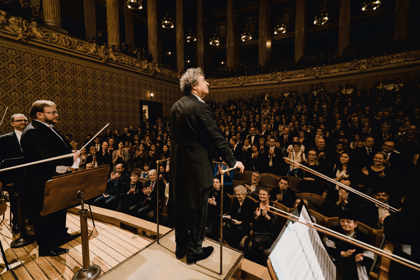 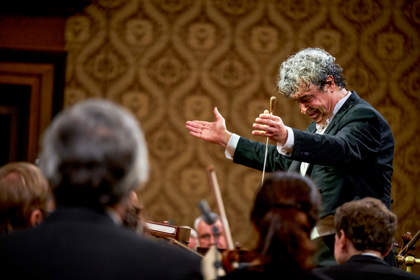